A Comprehensive Template Reflecting Natural Law; A Theory of Connection and Interaction. 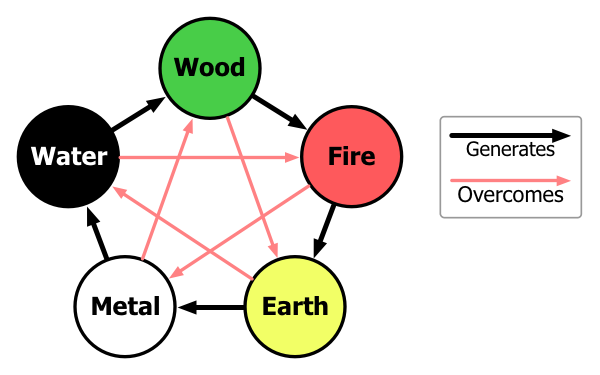 What is the Five Elements Theory?

Based on observations of the natural world, ancient Chinese people recognized continuous patterns of transformation and change in the universe. Initially, these observations were interpreted using yin yang logic, but later these interpretations were expanded using a new theory called the five elements.

The five elements theory evolved from the study of various processes, functions, and phenomena of nature. The theory asserts substances can be divided into one of five basic elements: wood, fire, water, metal and earth, which contain their own specific characteristics and properties. Today, the five elements theory is still used as a tool for grouping objects, and as a method for analyzing changes of natural phenomena.


The Origin of the Five Elements Theory

The yin yang theory has a close relationship with the five elements theory. They are often used simultaneously to explain natural phenomena. Ancient Chinese medical philosophers integrated the yin yang and five elements theories into their medical practices as early as the Warring States Period (475-221BC). As integration of these theories took place, a more formalized system of medicine was established. Today we refer to this medical system as Traditional Chinese Medicine (TCM). 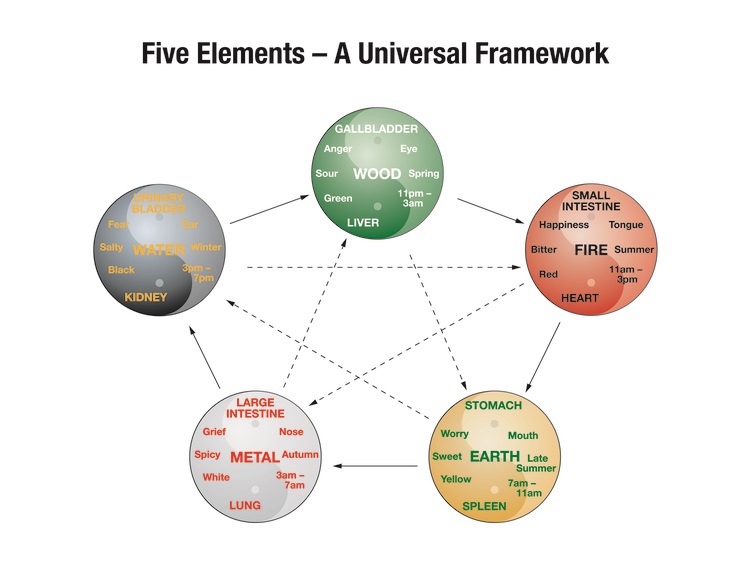 The Five Elements are a comprehensive template that organizes all natural phenomena into five master groups or patterns in nature. Each of the five groups - Wood, Fire, Earth, Metal, and Water - include categories such as a season, a direction, climate, stage of growth and development, internal organ, body tissue, emotion, aspect of the soul, taste, color, sound . . . the categories are seemingly limitless. The Five Elements reflect a deep understanding of natural law, the Universal order underlying all things in our world.

As shown in the table, there are organized relationships between the elements, nature and the body. The different vertical characteristics belong to the same element, and horizontally, each characteristic interacts with another according to a specific order and element. Working within this system of thought, everything has a correlation in nature.


A Theory of Connection and Interaction

Everything within each element is related. Let's take the Water element as an example. Look at the Five Element diagram: Water is related to winter, a cold climate, the north, the color black, the Kidneys, the emotion fear. These are things that share a deep, sometimes invisible, connection to each other. When it is winter there is a cold essence, it relates to and impacts in some way the Kidneys, the emotion fear is linked, though not always in an obvious, visible way.

The Five Elements show us how the structures and systems in our bodies are connected to each other; how we are connected to our environment and the natural world; how our world is part of the greater universe. Many people today have lost this deep connection to nature and no longer are able to feel this truth resonate in their being. The Universal principle of connection still exists nonetheless.


The Balancing Relationships of Generation and Control

When the Five Elements speak about generation, it means a relationship that nurtures and promotes growth. Think of a mother and child. The mother gives birth to her child and provides her energy to ensure the growth of her child.

Control, in terms of the Five Elements, represents a relationship that acts as a restraining energy or force, making sure that things do not grow too quickly or slowly, neither too strong nor too weak. Without controlling, things would fall out of proportion; balance would be lost.